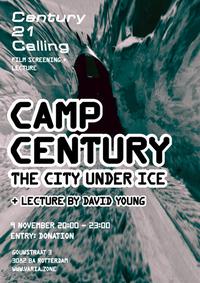 With Donald Trump's eagerness to buy Greenland, a new spotlight have been put on this island. However, it is not something new for Greenland to be in the centre of international geopolitics. With the melting of the ice sheets, new trade routes opening and a huge amount of mineral, oil and gas deposits, a new rush for the artic has started.

In the late 1950s, during the height of the Cold War, the US military constructed a secret base in the arctic, hidden from the populations of Greenland and Denmark. This base was a nuclear power facility and part of the secret Project Iceworm. During this edition of Century 21 Calling we will be screening the documentary Camp Century, which is about the construction of the base "Camp Century", the first of many envisioned bases on Greenland, to give you more context about the topic. Before the lecture there will be a lecture by David Young on the topic of Greenland, American politics and control and command strutter of the cold war.

David Young is a researcher interested in archiving media technologies, the history of computing, and the discourses of defence research in the United States during the Cold War. He is currently a M3C/AHRC-funded doctoral researcher at the University of Nottingham; his PhD topic is an examination of the technological administration of command and control systems, the forms of disciplinary practices they depend on in order to operate, and the strategic rationalities which shape their development over time. He has a background in digital media art, and has collaborated with artists, designers, and scientists in the production of experimental, research-oriented artworks funded by the Arts Trust Scotland, New Scotland's Alt-W award, and Creative Scotland.

Century 21 Calling is a series of screenings initiated by the Save_as collective and hosted at Varia in Rotterdam. Together, we take a look at the archival industrial films, corporate infomercials, tv reports and historical documentary of yesterday that shaped the imagination of tomorrow and hold it up to the light of the present.