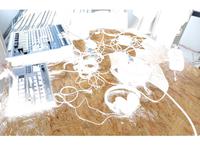 The word "infrafem" is a portmanteau of feminism and infrastructure, and refers to doing infrastructure with a feminist sensibility. We believe that considering the means of communication as a means of production and questioning who is making them and under which conditions is important.

Streaming With Infrafem is a moment of exchange of communal strategies, infrastructural knowledge, and design choices starting by redefining the notion of streaming. We will explore ways of "streaming" to each other by listening, waiting and responding, both through text (for example via collaborative editors), through audio (for example via the streaming audio/video servers), and other means.

Infrafem will be a day-long research and exchange meeting for cultural organisations that run and maintain their own digital infrastructure as part of their cultural programmes, culminating in a public radio broadcast later on where radio initiatives from other places abroad are invited to join and share their own experience.

More information about the public broadcast coming up later!

This project is supported by the Creative Industries Fund NL.