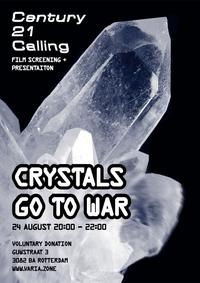 Century 21 Calling is back; still showing archival industrial films, corporate infomercials, TV reports and historical documentaries that shaped the imagination of tomorrow and hold them up to the light of the present.

This evening we will be screening the documentary Crystal Go To War from 1943. Created by the U.S. Army Signal Corps in 1943, it shows the processes that quartz crystals have to go through before they are ready to be inserted into radios and communication equipment.

Quartz crystals have been part of human life for decades and since the discovery of its piezoelectric properties in the 1880's it has been a key component in modern technology.

Before the screening, there will be a small introduction the usage of crystals in technology. So join us on the 24 for the first screening of the 2 seasons of Century 21 Calling!

“Century 21 Calling” is a series of screenings initiated by the Save_as collective and hosted at Varia in Rotterdam.