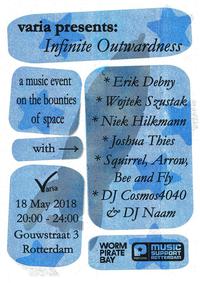 Since the beginning of time, space has captured the imagination of artists around the world. On the 18th of May varia is proud to present ‘Infinite Outwardness’; a music event based on the bounties of space, where several artists will present their idiosyncratic view on space exploration. Ranging from playable space junk to cosmic toilets, this will be an evening to remember!

This event is made possible with the kind support of Popunie Rotterdam, WORM Pirate Bay and of course... varia.