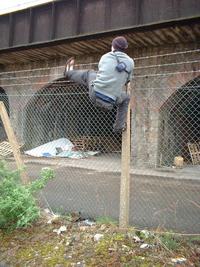 Heath Bunting is an artist based in the UK who, for more than thirty years, has questioned and undermined systems of control and communication. He began as a street artist putting up fly posters in public spaces, belonged to the first generation of net.artists in the 1990s where he found (and ran the server of) irational.org, but turned away from the Internet in 1998, seeing its corporate takeover as early as in that year.

He set up several radio stations, collaborated with Kate Rich on alternative distribution systems for goods and workshops for trespassing private property. For his "Identity Bureau', he investigated ways for people to legally obtain a new names and identities using loopholes in the bureaucracies of Western countries (and gave an Identity Bureau workshop in 2014 at Wlfrt Projectspace Rotterdam). In his daily life and travels, he strictly avoids use of electronic systems that make him traceable, including bank cards and mobile phones.

The above is only a small fraction of his activities in working against control systems. Florian Cramer will have a two-hour conversation with Heath Bunting on his past and present projects, with the aim to share Heath's knowledge and experience with the audience. This will be followed, at 16.00, by heath's critical feedback on the current activities of the Voluntary Fire Brigade of the Apocalypse in Rotterdam.