THE SOCIAL IN THE MEDIA: On Digital Interdependencies (Varia Visits ODD) 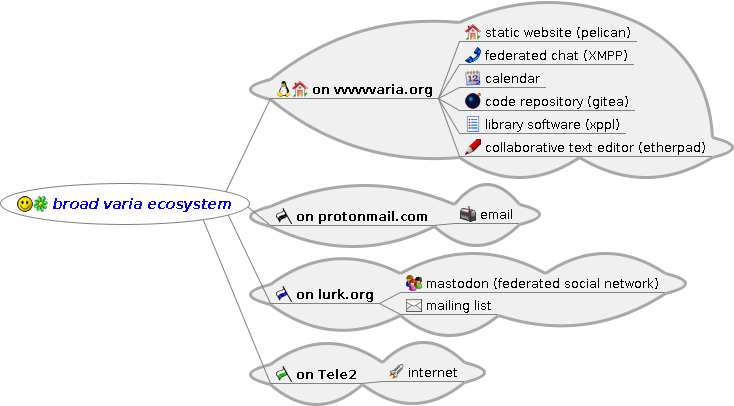 In June 2019, a delegation of Varia traveled to Bucharest to meet and exchange with ODD, a space for theoretical discussion and social gatherings of all kinds founded and run by Cristina Bogdan. On the 19th, we gave a presentation entitled "The Social in the Media: On Digital Interdependencies". This was the abstract of the talk:

One of the big contradictions of the scene of self-organised cultural initiatives is that we are extremely reliant on corporate social media when it comes to our digital presence. For example, it seems both unthinkable and inescapable to organise an evening without a corresponding Facebook event, or to plan that evening without Google Docs or coordinating via a Whatsapp group.

The evening will touch upon alternative tools and approaches, from federated and community-owned social media platforms, and other types of infrastructures that Varia, a space in the South of Rotterdam (the Netherlands), is experimenting with. Departing from discussions on this situation and its causes, we will try to imagine and formulate the affective infrastructures that shape everyday cultural practices and online socialities. 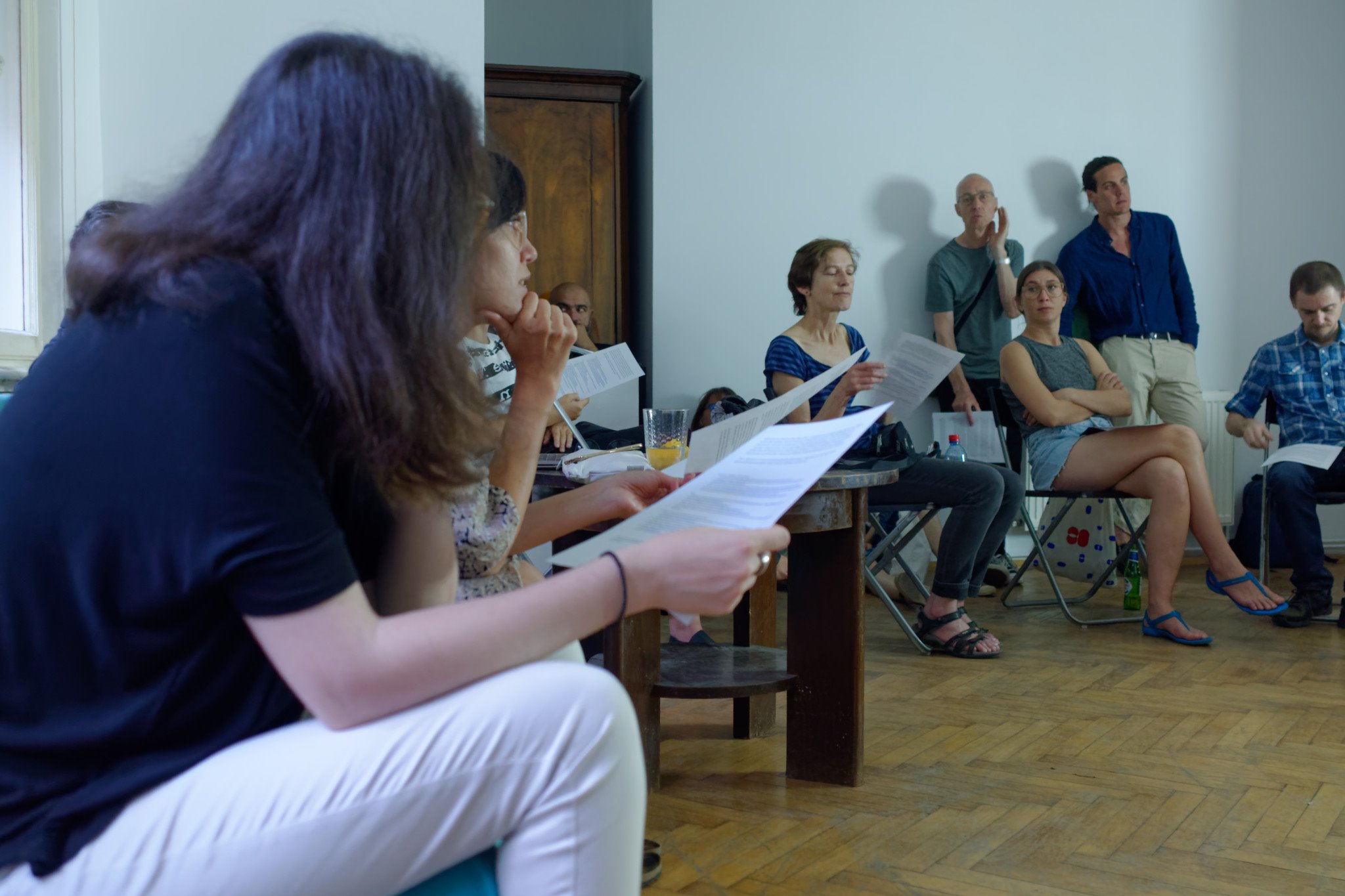 We started the session by briefly mentioning our individual practices and how Varia came from a dissatisfaction with existing models for self-run spaces, such as the makerspace (lack of critical theory involved), the hackerspace (technology for technology's own sake), the co-working space (sociality as a a service), the fablab, etc.

After this introduction, the topic of the evening was more precisely expounded through a collective reading of "Dear Cultural Institution, There's an Elephant in the Room", a letter by Brussels based organisation Constant which addresses the troublesome relationship that independent cultural institutions maintain with corporate tools and social media. The letter was written as a reaction to multiple organisations' request for "help to degooglify". Following the reading, a short discussion took place, during which we invited the audience to exchange with us the intricacies of their relationship to corporate social media, but also their experiences, or lack thereof, and the obstacles they encountered while attempting to establish some distance.

Obviously, Varia hasn't found any definitive solution to this issue, but the question does connect to a lot of the practices in and around Varia. To explain how we tried to address some of the concerns raised in the letter we created a map of the broad Varia digital ecosystem. With this map, we wanted to stress that our current strategy consists in a combination of self-hosted tools and services (such as the website, the collaborative note taking software Etherpad, the on-line calendar and the git-based code sharing repository), but also some that are run by solidary organizations (such as mailing lists, chat, individual fediverse micro-blogging accounts) and some that are paid for (email). Our wish was to emphasize that a cultural organization doesn't necessarilily need to do everything by themselves, but can make use of what is already available.

We then spoke about our use of bots in chat systems, both to communicate and to document our exchanges. Our initial idea was to develop new forms of note-taking based on our interaction habits. We share a lot of different types of information in group chats, from news to recommendations of articles to instigations to clean the fridge. Starting from the conversational nature of our exchanges, we are experimenting with two different bot-users in the chat: one that gathers images shared on the main Varia channel and displays them online, and another one, focused specifically on the topic of digital interdependencies, that gathers images, quotes and looks for books' citations.

Beyond these internal initiatives, we also try to reach out and collaborate with people involved in the development of the tools we are interested in. Last year we invited Daniel Gultsch, the developer of Conversations, an open source application for self-hosted chat that is used in Varia. Daniel introduced his work and reflections before animating a worksession organised as part of the Welcome to the Federation project. This example was mentioned as one of the ways in which Varia tries not only to use, but also to contribute to and engage more broadly with free software tools and culture. 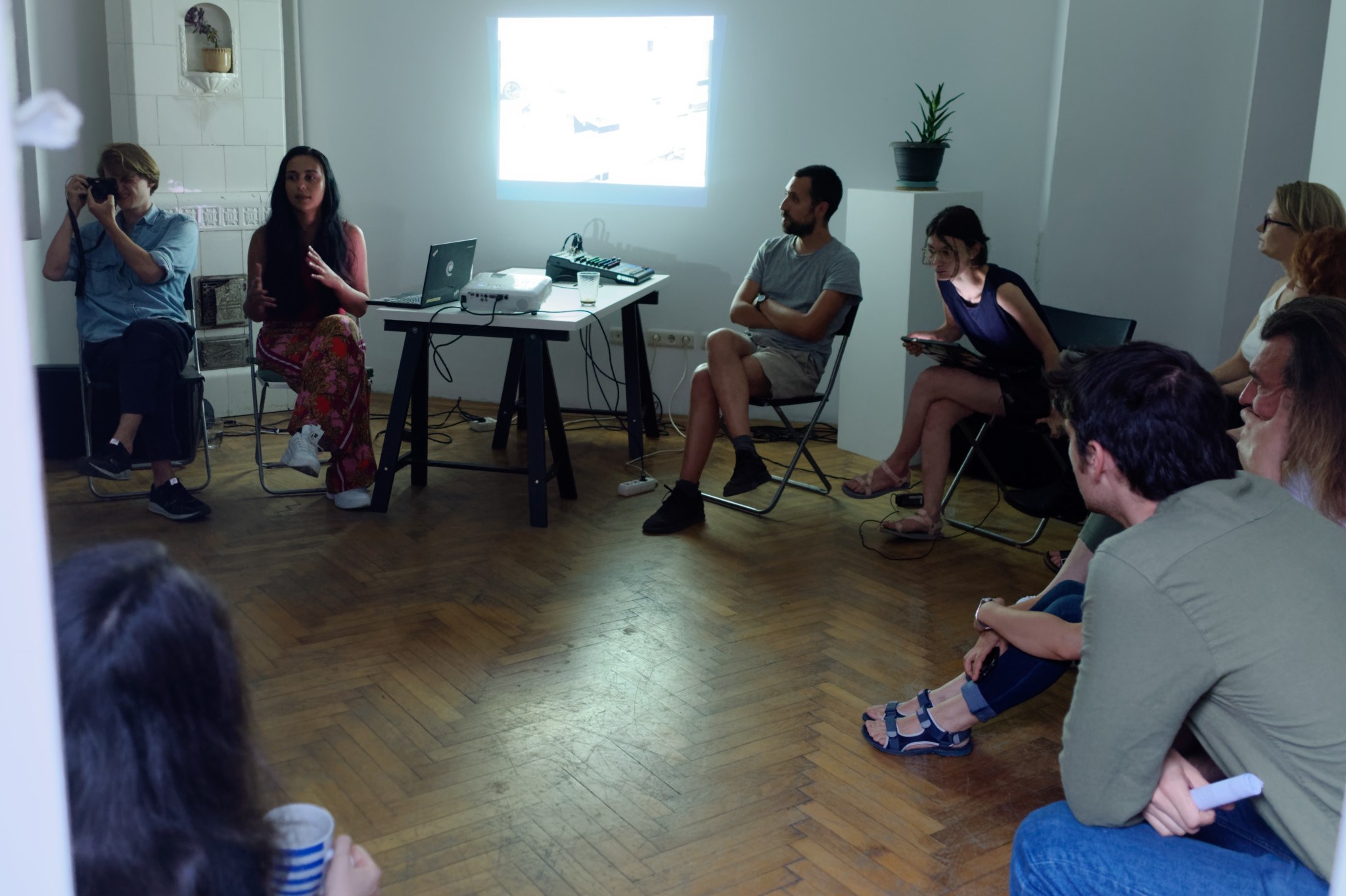 An other thing we mentioned is the centrality of Etherpad, the collaborative note-taking software, in our practice. The main reason for that is its flexibility and the tools one can build on top of it, such as Etherdump, a command line tool written by Michael Murtaugh that converts etherpad pages to files. Our use of this tool turned our collaborative writing practice into a collaborative publishing practice. As the pads are driving us to write, edit, add and remove text all the time collectively, most content can be described as traces or fragments rather than "properly" edited essays. Reflecting on this tendency, we discussed the possibility of publishing through leaking. This idea became the departure point for the development of a new Etherdump feature allowing us to collect only the pads featuring a "PUBLISH" mention. As a result, the Etherdump became a fuzzy field of documents, that can speak to others in the group.

For the last part of the presentation, we spoke about collaborative projects initiated within Varia which make explicit the importance of tools within our members respective practices. The project Pushing Scores, developed by Cristina and Julie, was mentioned because its development was heavily influenced by our familiarity with software, including its vulnerabilities. Pushing scores, an archive for a research project about experimental score making, was commissioned by De Player, a Rotterdam based organisation dedicated to experimental music and performance. The outcome is a database free lightweight website made using Python (Flask, Jinja and nltk) in which all the content is interlinked through the vocabulary used by De Player themselves to describe it. Each word submitted by de Player is a clickable link, offering the possibility to chose from a list of sentences containing this specific word within the whole collection to access an other item.

Ultimately, we tried to introduce and discuss our own experience to point out to strategies that can be adopted by other organizations, such as using the resources of hosting associations or solidary organizations, rather than corporate ones. Furthermore, we also tried to emphasize how the adoption of such tools have provided us with the freedom to implement some custom elements, from bots to publishing tools. We explained our attachment to free software and what other types of hosting can be (such as the ones inspired by the Feminist Server Manifesto). We discussed as well the value and perils of federation against the private silos of the GAFAM and the need for trusted intermediaries. Together with ODD and the audience we discussed the politics of adoption of free software and self-hosting, the issue of time investment and the issues around delegating control over services and instruments.