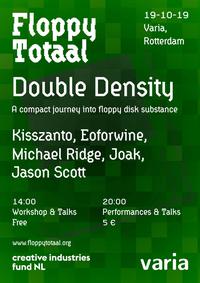 Floppy Totaal visits Varia for another round of dual-layered action. At "Floppy Totaal: Double Density" you can join members of the Floppy Kick music label during a live recording and publishing workshop in the afternoon. The subsequent evening program is filled to the brim with performances by Kisszántó and Eoforwine, presentations and conversations with Joak and Jason Scott and a long distance contribution by Michael Ridge.

The emphasis of the event lies on the concept of the floppy disk as comfort food in a "future/present shocked" digital age. In what way does working with floppy disks help us cope in a time preoccupied with "new" media and planned obsolescence? Does the floppy disk hold more content than just 1,44 MB of data? Join us to find out!

Part 1 of Floppy Totaal @ Varia (14:00-18:00) is free and consists of a special Floppy Kick workshop and a conversation.

Part 2 of Floppy Totaal: Magnetic Flux starts at 20:00 and has tickets for sale that can be purchased at the door for 5 euro's each. The event consists of a series of talks, performances and contributions by Eoforwine, Kisszántó, Michael Ridge, Joak and Jason Scott.

Floppy Kick Records is a not-for-profit, floppy-only label that was formed in Budapest in 2013. All its releases are handmade and any "income" they produce goes straight into future releases. They take a non-political, yet critical position by explicitally rejecting any racism, sexism, homophobic or other forms of radicalism on their releases, choosing to instead focus on the beauty of sound. This can be in any style; experimental, noise, ambient, musique concrète, dark sounds, hnw, avantgarde, field recordings, industrial, power electronics, lo-fi, grindcore, or anything interesting. They believe in physical formats and respect their collectors. During their workshop at Floppy Totaal you can contribute to Floppy Kick by helping out with the recording and releasing of a brand new floppy release.

Mark Windisch aka. Eoforwine is the founder of the Floppy Kick label and plays beatless lo-fi noise music, spiced with modified field recordings, synths and a light theremin. He is a regular participant of Eastern Hungary's noise events, including the annual Zajkert (Noise Garden) and the Banzaj series, and has toured through and played at many experimental festivals and gallery openings through Middle-Europe and Ireland.

Tamás Szántó is a DJ, producer, cratedigger and promotor who is dedicated to seeking strange soundings and musical forms with peculiar diligence. He harkens the musical topicalities; not to adapt, but to avoid them. Collecting records such as experimental noise mixes, or fine theatrical idm ones; he might as well have just the right, harsh & obscure acid vinyl to mix further with.

Joseph Oliver Anton Knierzinger or JoaK is an artist and ghost artist. At the moment he works on different algorithms and alogisms between Vienna, Guangzhou and Wartberg. At Floppy Totaal he will present the results of his explorations into the recordable magnetic properties of the floppy disk.

Michael Ridge is a UK based artist that creates works whichoften incorporate sound, video, electronics, sculpture, collage and found objects, often exploring the properties of sound reproduction through non-musical materials and objects. He has a keen interest in documenting and presenting the unwanted, overlooked or decayed. Some of his activities include recording and performing Noise Music under the alias Zebra Mu, running the DIY record label Quagga Curious Sounds, being one half of the drawing/zine/mail art duo Ridge & Scrase and being a member of the artist collective other/other/other. For Floppy Totaal Michael Ridge will compose a new sound art composition that draws inspiration from the works of John Cage and Alvin Lucier; whilst examining the physical and storage limitations of the humble floppy disk. A commemoration of extreme file compression!

Jason Scott Sadofsky is an American archivist, historian of technology, filmmaker, performer, and actor. Scott has been known by the online pseudonyms Sketch, SketchCow, and The Slipped Disk and has been called "figurehead of the digital archiving world". He is the creator, owner and maintainer of textfiles.com, a web site which archives files from historic bulletin board systems. He is the creator of a 2005 documentary film about BBSes, BBS: The Documentary, and a 2010 documentary film about interactive fiction, GET LAMP. During Floppy Totaal a long distance conversation will be held with Jason Scott about his work, his life and the current state of the floppy disk.

Floppy Totaal is a Rotterdam based initiative by Niek Hilkmann, Thomas Walskaar and Lídia Pereira that investigates the reuse and re-purposing of 'outdated' technology as a cultural phenomenon. By examining the contemporary usage of the iconic floppy diskette, they hope to assess the way past technology is integrated into our culture today, as well as its future potential. The goal of the project is to inject the debate surrounding obsolescent media with new enthusiasm and stimulate a critical approach to the topic with the help of extensive field research in the realm of the floppy disk.

This event is made possible with the kind support of Varia and Stimuleringsfonds Creatieve Industrie (Creative Industries Fund NL).