Due to the current situation and public health concerns the event will not be public in the physical space of Varia but will be STREAMED online. Radio on the radio is a live, intermittent radio program with performances that in one way or another discuss radio. It will feature descriptions of radio tools, unboxing and unpacking of radio hardware, radio silences, interviews about radio, radical radio noise, radio-active female monstrosities... 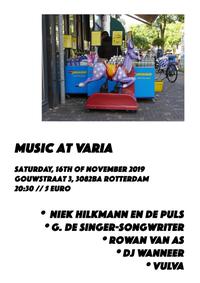 Another musical night at Varia! Join us for an evening full of singers, songwriters, noise and cardboard!

A new season has arrived; time for some fresh concerts at Varia! Kicking of the second half of 2019, we organize an event where three stirring acts will show their craft.